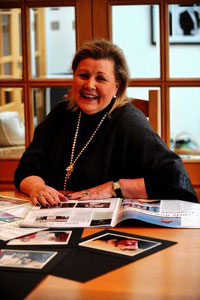 Great article in the Hull Daily Mail on Friday, January 25 by Emma Wright

At it's helm, there has always been a formidable female force.

Which is probably why, in its 21-year history, Osprey (Osteoporosis Research in East Yorkshire) has raised more than £1.5m.

The charity was set up to fund research into the brittle bone disease osteoporosis in 1992.

The committee was originally chaired by Sheila Chetham, who passed away in 2002.

She had a reputation for getting the job done with no fuss or qualms.

Her successor seems almost as no-nonsense and has worked inexhaustibly for the cause.

“Sheila was about 4ft 10ins and in her seventies, but she was a formidable woman,” said current chairman Angela Warneken Gold.

“When she rang the house phone I came running, like a schoolgirl being summoned to the headmistress’s office.

Osprey was born in the early 1990s, thanks to Sheila and Professor David Purdie.

Prof Purdie was researching osteoporosis in menopausal women at the time and was keen for the charity to be formed.

Sheila set up the organisation with him and soon Angela was enlisted as one of the committee members. Angela said: “Sheila told me I could come to a meeting and if they liked me, I could join.

“I asked ‘what if I don’t like you?’ but she said that didn’t matter.

“She was a great enabler because no one said no to her.

“But it wasn’t all her work, she certainly knew how to delegate.”

It was Sheila’s unshakeable enthusiasm and candid approach that helped take the charity, and therefore Hull, to the forefront of bone disease care and research.

Angela and Sheila soon became firm friends and were pretty much working the hours of a full-time job to keep the charity going.

Whether it was viewing a venue for an event, selling tickets or simply manning the phones, the women, for all intents and purposes, were the captains of the ship.

“Most people on the committee had ‘proper’ jobs, while I had stopped work to have my daughter Alice,” said Angela, 60.

“So it often fell to Sheila and I to go and look at venues and all different things, so we would take ourselves off together.”

In 2002, it became apparent Sheila was unwell and she was diagnosed with a brain tumour.

“We’d celebrated the milestone in the June and we all believe she kept herself going for that.

“We had a very special bash at Tickton Grange and Hugh Rice himself had given us a diamond to auction.

“John Godber and Maureen Lipman came and was a really good evening. A good time was had by all, especially Sheila.”

At Sheila’s request, the charity was not left to fall apart and in 2003, it was Angela’s turn to take up the reins.

Sitting at the helm, Angela began to see how Sheila had made the charity such a success.

“She had four children so there were family members all over the area,” said Angela.

“She also had a massive social circle because of all the children and partners and then the grandchildren, plus all their different friends.

“So it was relatively easy to sell tickets for events.”

Events such as the annual Valentine’s Ball, boating trips affectionately known as the “booze cruises” and countless dinner- dances have been organised over the years.

It is these charity events which have paid to equip the Centre for Metabolic Bone Disease in Anlaby Road with the most up-to-date bone density scanners.

Osprey has also funded several research studies at the University of Hull.

Most recently, the charity is funding three PhDs, sadly one of which was for Tom Chesters, who was killed in an avalanche in the Scottish Highlands at the weekend.

He was researching osteoporosis and whether you ended up with the disease because of the way you walk or whether your gait was a result of contracting the condition.

Angela said: “He was just putting together the findings of all his research when he died.

“His death was incredibly sad, especially as he was only 28.”

One of the most notable events in the charity’s history was when Camilla, Duchess of Cornwall, visited the Metabolic Bone Disease Centre in 2006.

The Duchess, who was president of the National Osteoporosis Society, met about 40 people on the day, many of who were committee members of Osprey.

Angela said: “We had to write a line or two about each person she was going to be presented to before she came.

“And she remembered it all. She made everyone feel relaxed and calm and was a truly nice person.

“Because that gave the charity a very high profile, 2006 was a very successful year.

The staggering amount of money raised for the charity is down to the dedication of the committee members and the generosity of the trustees and patrons, including Pauline Prescott and John Godber, who have donated time and money to make Osprey what it is.

As 2013 is the anniversary year, there are a number of events planned for Osprey, but what do the next two decades hold?

“We need to get some young blood in,” said Angela, who spoke to the Mail at her home in North Ferriby.

“We need more committee members and want some younger members who are going to be committed.

“It is hard work, but it is rewarding.

“If they never find a cure for osteoporosis, there will be some very good strategies in place to prevent it.


Read the original article at:
http://www.thisishullandeastriding.co.uk/Charity-pound-1-5m-formidable-female-helm/story-17958481-detail/story.html.