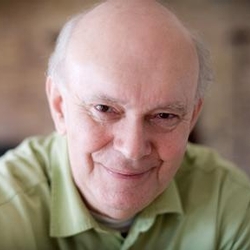 Alan Ayckbourn is one of the world's most popular and prolific professional playwrights. He has written 78 full length plays and more than 20 other revues and plays for children. He is also an acclaimed director, who Arthur Miller said directed the definitive version of his play A View From The Bridge.

Alan was born in Hampstead, London, on 12 April, 1939. His mother was Irene Maud Worley - better known as the novelist Mary James - and his father Horace Ayckbourn, lead violinist with the London Symphony Orchestra.

Educated at Haileybury, Alan left school at the age of 17 to pursue a career in the theatre immediately gaining a job with the theatre impresario Sir Donald Wolfit in 1956. He was with the company for three weeks as an acting stage manager for the production The Strong Are Lonely at the Edinburgh Festival. Alan went on to work at theatres in Worthing, Leatherhead and Oxford, before being employed in 1957 as a stage manager and actor at the Library Theatre, Scarborough.

Alan has been a Patron since the year 2000 and continues to give his generous support to Osprey.